Easily track your sales and watch your money grow.

My Journey and My Passion – Why I do What I Do

I grew up in a small, but famous town, Hershey, PA, affectionately known as Chocolate Town, USA.  Hershey has something no other town in America has: the heavenly smell of baking chocolate all day long.  The Hershey Chocolate factory was located right in the center of town, at the intersection of Chocolate and Cocoa Avenues.  The main street, Chocolate Avenue, is lined with quaint Victorian houses, illuminated at night by the soft light of street lamps in the shape of Hershey Kisses.  Main Street USA, right out of a Disney movie.  How could you ask for anything more?  The majority of the townspeople worked for either the Hershey Foods Corporation or the Penn State Medical Research Center.  The public schools continue to be in the top 5 in the state.  There is very low unemployment, and virtually no crime at all.  People who are born in this idyllic town of friendly faces surrounded by lush farmland rarely leave, but I did.

You see I had dreams and ambitions that could never be fulfilled in this small conservative town.  It was the late 1960’s, and our country was in deep social and political turmoil.  Vietnam war protests, civil rights marches, hippie movement, pot smoking, bra burning, women’s liberation, and then the horrific assassinations of Robert Kennedy and Martin Luther King, Jr.  Believe it or not, very little of this phased the day-today lives of the Hershey-ites.  In fact, at the dinner table every Sunday afternoon (we lived next door to my father’s parents, very similar to the sitcom Everyone Loves Raymond), my father and grandfather, both stubborn, right-wing conservatives, continued to preach that women had no place in business, and the only jobs suitable for women were secretaries, school teachers, or nurses, and women should most definitely stop working after getting married and having children.  As early as age 5, I can remember my dad and grandfather saying that whoever makes the money, controls the family.  Many times, I can remember my dad saying “A man is King of his castle, and he must be obeyed.”  Somehow this did not sound right to me though, but, to keep peace in the family, my mother and grandmother waited on the boys hand and foot, made them any food they desired, whenever they desired, and played waitress at the dinner table, because that was a wife’s duty.  I do remember thinking that I was not sure I wanted to be a wife if this was what it was like, since I have always had a quietly rebellious nature.

When I was 11, my mother, who also has latent rebellious tendencies, gently insisted on getting a part-time job to have a bit of spending money.  My dad reluctantly agreed, but only if the household continued to run on the same mealtime and cleaning schedule as before.  Dinner mealtime in our house was very rigid, which seems unthinkable today.  My father arrived home from work at exactly 5:15pm and dinner had to be on the table exactly at 5:30pm without fail.  My mother agreed to these conditions, but took me aside and told me that she was going to have to teach me how to cook because I would have to start dinner sometimes to make the 5:30pm deadline.  I did actually enjoy learning to cook.  Both my mother, who is from northern Maine, and my father’s mother, who is PA Dutch (German ancestry), were excellent cooks, and rarely used a recipe, so she taught me how to cook the same way.  So, our routine was that I started dinner when I got home from school at around 4:00, and my mom would finish it up when she arrived home at 5:00.  Everything was going fine, until the day my mom called to say she had to work late, and told me that I had to finish up the dinner by myself.  Now, I was just learning how to cook, and I had not quite mastered the art of getting all the dishes finished at the same time.  Well you can just imagine what happened now!  The pot roast was over-cooked, in fact I almost burned it, the mashed potatoes were lumpy and cold, the broccoli was total mush, and I forgot to make a dessert, which was unheard of.  Dinner was 15 minutes late.  Now that had never happened in our house before!  My father was very angry and started to yell.  Then I started to cry, but I was not allowed to leave the table, and my family just continued to eat dinner like nothing was wrong.  That was a pivotal day in my life.  I decided that no man was ever going to intimidate me or control me, so to ensure my freedom, I had to make enough money to take care of myself and my family, and that’s exactly what I did. 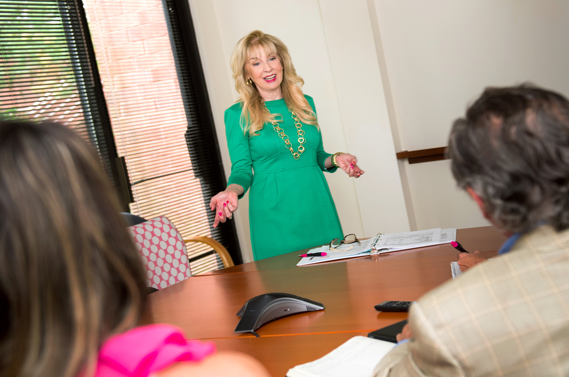 I was the first female in my family to go away to college, deciding to major in business and technology instead of becoming an elementary school teacher, which is what my mother wanted me to do.  When I graduated from college, I got a job as a computer programmer, which was a relatively new field in the mid-70’s.  The farm girl from Hershey, PA was working as a computer programmer in downtown Philadelphia in 1976, the year of the bicentennial, celebrating my financial freedom along with our country’s.  Who would have imagined this when I was 11 at the dinner table – quite a surreal moment for me!

I was the first female programmer in my company, and I actually think they hired me as an experiment.  However, I had a distinct advantage being a woman, because I really cared about helping my client, and I genuinely wanted to solve their problem, to make their job easier and more efficient.  User-friendliness in computer systems was a foreign concept then, but I was determined to make their accounting reports more intelligent.  I took it upon myself to rewrite their entire accounting system, and was promoted to project manager within 18 months.  I was a Numbers Diva even back then!

Easily track your sales and watch your money grow.

Then an opportunity arose to move to Los Angeles and work for an innovative software company where I became totally fascinated with accounting software.  Ok don’t laugh, I was in heaven because I was able to solve problems by using a process and a system to save time and increase my client’s overall profitability, sound familiar?  I spent 25 years in corporate rising up through the ranks to be a vice president at of Financial systems at Aetna and then at Vanguard.  It was then that I longed for the good old days when I worked directly with clients to solve day-to-day problems, to see the smiles on their faces when they realized a system could help them make more money, with less stress.

I was living my dream of financial freedom, but at what price?  Now I was a prisoner to my own lifestyle, and I thought there was no way out, funny how we tend to do that to ourselves.  Then tragedy struck.  My boss, who was only 5 years older than me, fell over dead from a heart attack while running on the beach at the Jersey shore.  That is the day I decided to resign.  Life was too short.  I am blessed with a supportive family, and I always wanted to have an interior design business; believe it or not, so I studied interior design for a year, and put up my shingle in 2002.  I had a big network of friends who had always admired my design sense, so getting clients was not difficult; but determining the pricing, managing invoicing, purchasing, and sales tax was a nightmare!  At the end of my first year in business I went to my CPA with a shoe box full of disorganized receipts (designer shoe box of course), which is quite embarrassing.  I have never told this story before, but when he saw the shoe box, he looked at me, laughed and said, “LeeAnn, uh what did you do at corporate?”  He did know the answer to that….now my face turned bright red.  I made some sick excuse that I didn’t have time to get the finances organized because I was spending so much time with my clients, but the truth was I really did not want to deal with the financial part of my business.  That first year, I paid the price for that.  My net income was only $1,000 for the entire year….for all that work.  Now I was depressed, but that lasted only for a day, thank heaven.

If I wanted a profitable business, I realized I had to get serious about the finances.  I had heard QuickBooks was the best accounting system for small businesses, so I bought it, and I figured I could set it up over a weekend.  I had implemented hundreds of complex accounting systems for large corporations, so I figured doing this for a small business had to be a lot easier, right?  Boy was I wrong!  Small business accounting structure is dramatically different, and I was hopelessly stuck.  Then I decided that if I’m going to learn QuickBooks, I should do it the right way, and I became a Certified Pro-Advisor.  Soon, my interior design friends started to ask me to help setup their QuickBooks system and train them, which I thoroughly enjoyed.  Then they referred me to friends and family who owned other types of businesses.  Soon I had more QuickBooks clients than interior design clients, and in 2009, I closed my interior design business and The Numbers Divas was born.  So why do I do this?  To teach you, my fellow entrepreneur, the importance of tracking and understand your numbers, which gives you the power to control your own destiny, the freedom to live the life of your dreams, just the way I am.  So I never have to cook a meal again….Now that really makes me smile!!

Thank you for reading my story.  My mission for the rest of my life is to help as many entrepreneurs as possible make as much PROFIT as possible, for your own financial independence, enabling you to achieve your own lifelong mission.  Together we can boost the American economy, one small business at a time.

Much love to you all,

Are you ready to stop avoiding your numbers and start making serious money in your business?!

show YOU how to KEEP more of the money you make.

Lee Ann is a brilliant business coach for our company in addition to managing all of our finances, bookkeeping and accounting. She is committed, expert, collaborative, insightful, proactive and delightful. A RARE find and terrific asset to our team.
Visit Wendy at www.LanguageofCaring.com